BLINDED BY THE LIGHT (NOT!)

I was in a hardware store the other day, looking at solar lights, when the clerk and I started talking about how the brightness of the lights solely depends on just how much sunlight they're exposed to. He then told me a funny solar-light story that had me cracking up laughing.

He said he owns a house, a duplex, and has those solar lights on stakes lining the walkways on each side.

He said the other night, he happened to notice the tenant who lives on the right side of the duplex sneaking over to his side and swapping her dim solar lights for his brighter ones!

He laughed as he told me that the first night, the lights she’d swapped were brighter because they had been in the direct sunlight all day, but the next night, after being in the shade on her side, they were really dim, and the poor woman couldn’t figure out why.

I feel her pain.

I’ve never had good luck with lights that depend on nature to operate. For one thing, the entire front of my house is in constant shade. When the house was first built, I installed sensors on the outside garage lights so they would pop on automatically at dusk and turn off when the sun rose.

Unfortunately, because that side of the house never saw the sun, the lights stayed on 24 hours a day because the sensors thought it was always dusk.

Then there were the strings of solar Christmas lights I was so thrilled to discover a few years ago. The thought of being able to decorate my front porch with lights and not have to worry about tangled electrical cords or quadrupling my electric bill, made me fork over a couple hundred dollars for the lights. I figured just the money I would be saving on my electric bill would pay for them.

Forgetting that my front porch never saw sunlight, I carefully wound the lights around each post, railing and spindle. Then I eagerly waited for the next night, so I could see how the lights would look when they popped on.

To my delight, they glowed beautifully in all of their multi-colored glory right at dusk and looked fantastic. Five minutes later, they shut off, already out of power because they had seen the sun maybe 20 minutes all day.

So that Christmas, I told people if they wanted to come see my Christmas lights, they would have to zoom by my house at a specific hour and minute or they would miss them. My decorations came to be known as the world’s briefest Christmas-lights display.

The next year, I decided to hang the lights where they would get the most direct sunlight during the day, so they would stay lit at night. That spot turned out to be on the back deck, which faces nothing but acres of woods. The squirrels and the deer really enjoyed them.

Years ago, my husband had a wristwatch that ran on solar power. The problem was, it was pretty difficult to keep it charged, so every time he drove, he would hang his arm out of the car window so his watch could catch the sunlight and recharge. He ended up with a one really brown arm…and a watch that ran maybe three hours per day.

He then learned that if he kept the watch under a bright 100-watt bulb, it could charge without the sun, so that’s where he put his watch every night as he slept. The problem was, keeping a 100-watt lightbulb turned on all night, every night, for the sole purpose of charging his watch, ended up being so expensive, he could have hired someone to follow him around all day and announce the time to him.

I’ve noticed when I’m out walking the dogs after dark, that most of my neighbors have those solar stake-lights lining their walkways or driveways. But most of the lights' brightness is uneven, depending on which ones get the most direct sunlight and which ones are nearer to the tallest grass or trees. So the rows of lights kind of look like a piano keyboard.

I’d never dare line my driveway with lights – or anything else. This past winter, I bought a bunch of those reflective driveway markers that show the plow drivers where to plow. Well, I guess my plow driver thought they were targets because he ran over all 16 of them, leaving nothing but piles of fiberglass splinters in their wake. And then he plowed right across my front lawn.

So unless I chop down all of the trees on my land, solar-powered anything probably isn’t a good option for me. Still, this coming Christmas, because I paid so much for those solar Christmas lights, I just might try decorating the front porch with them again.

And if you happen to drive by between 4:14 and 4:30 p.m. during the month of December, you just might be able to catch them while they’re lit. 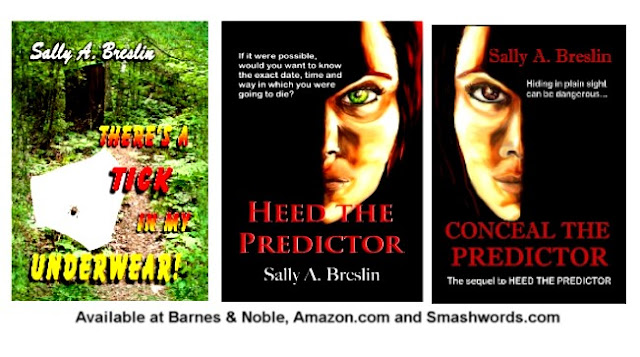