REMINISCING ABOUT THE SUMMER OF WAYNE

This time of year, when everyone begins to talk about their summer plans – mainly because they are fed up with cold weather and are eager to look ahead to warmer days – I think longingly about the summers I spent back when I was in my early teens.

My friends and I never were bored. We always thought of something to do or some way to pass the time – that is, when we weren’t earning a few extra dollars babysitting for various neighbors. There was the summer we decided to form a rock band, even though we couldn’t sing or play any instruments. There was another summer when we made costumes and put on horror shows in my basement for the local kids in the neighborhood. And there also was the unforgettable summer my friend Janet, my parents and I spent camping in the wilderness – the adventures of which I have documented in my book, There’s a Tick in my Underwear!

But no matter which summer it was, there always was downtown Manchester, the favorite summer hangout of just about every teen back in the 1960s. Manchester was where the movie theaters, library, pizza parlors, bowling alleys and endless stores were located.

The one place, however, where everyone inevitably ended up at some point or another, was the Puritan on Elm Street.

The Puritan was THE place to be back then.  On the main floor was a casual restaurant (sandwiches and burgers) and a big soda fountain, the entire length of the restaurant.  On the second floor was the Tea Room Restaurant with, from what I've heard, fancy tablecloths and real silverware.  In all of the years I went to the Puritan, I never once set foot upstairs.

The soda fountain usually was where my friends and I hung out during the summer months.  We’d sit at the Formica counter and nurse cherry colas or ice-cream sodas and enjoy the air-conditioning until one of the managers would give us his familiar “buy something else or quit taking up space” looks.

Although our main reason for going to the Puritan usually was to have a place to sit and cool off in 90-degree weather, our reason suddenly changed during the summer before I entered the 10th grade.   I still like to refer to it as “The Summer of Wayne.”

It all began one Saturday afternoon when my friend Sue and I walked to the Puritan for our usual Saturday chocolate ice-cream sodas.  There, behind the

counter was a new employee - a cute, dark-haired guy in tight black pants, a short-sleeved white shirt and a white apron.  As he wiped the counter, both Sue and I stared, mesmerized, at his flexing biceps.  We ordered so many sodas that day, we used up our whole week’s babysitting earnings in one shot and ended up with wicked gas pains from all of the carbonation. But we figured it was worth it, just so we could sit there and stare at the new, resident hunk.

“I think he smiled at me,” Sue said as we walked home from the restaurant that day.

“He probably just had something in his eye,” she muttered.

During our subsequent visits to the Puritan, we learned (only because the
manager once called him by name) that our dream guy’s name was Wayne.  He even began to chat with us as we loitered at the counter.  By then, Sue and I had become masters at nursing our ice-cream sodas until the ice cream turned to liquid and all of the fizz had fizzled out (which helped us avoid the aforementioned gas pains).

“I wish I knew Wayne’s last name,” Sue said as we sat on my front steps one afternoon.

I shrugged. “Why don’t you just ASK him what his last name is?”

Sue looked appalled. “I couldn’t do that!  It would be too obvious!”  She paused for a moment, then added, “If I knew his last name, I could look up his phone number and call him!”

“And that’s not too obvious?” I asked.
“Yeah, but at least I wouldn’t have to face him in person!” she said. "I'm much braver on the phone."

As it turned out, we learned Wayne’s last name the very next day.  The weather was raw and rainy, but we still headed over to the Puritan.  Wayne was just arriving for his shift as we got there.  He was wearing a black satin jacket that had “Wayne” embroidered across the shoulders on the back, with “Bass” embroidered under it, right above a picture of an eagle in flight.

“That’s it!” Sue excitedly whispered to me. “His last name is Bass!”

That night, as I watched in disbelief, Sue looked up every Bass in the phone book and methodically called each one.

“Maybe he lives out of town,” she said, frowning, over an hour later, after she’d dialed the last Bass and was told for the umpteenth time she’d reached the wrong number.  She slumped down on the sofa and sighed in defeat. “Or maybe he doesn’t even have a phone.”

Still, Sue and I weren’t easily discouraged.  We allowed ourselves to daydream about Wayne and imagine what it would be like to become “Mrs. Bass.”

“We’ll have two children,” Sue said as she doodled the name “Susan Bass” all over the cover of a magazine she’d been reading. “A boy and a girl - Wayne Jr. And Cassie.”

“Cassie?”  I repeated. “They’ll call her Cass for short, and then she’ll be Cass Bass!  What kind of name is that for a kid?”

“Oh, you’re just jealous!” Sue snapped. “You know Wayne likes me better!  I’ll bet you a dollar he asks me out first!”

My chin rose defiantly. “You’re on!”

But reality has a way of destroying even the best daydreams.  A few days later, as Sue and I approached the Puritan, we happened to see Wayne standing out front on the sidewalk.  Attached to his arm was a blonde who was so sexy, she made Marilyn Monroe  look like a boy in comparison.  Two other guys, both wearing the same black satin jackets as Wayne’s, also were standing there.  When I got close enough to catch a glimpse of the backs of their jackets, I burst out laughing.

Sue frowned at me “What’s so funny?  Our Wayne is with some sexy blonde and he seems to be enjoying her company way too much!  We can’t even begin to compete with someone like her!”

“Read the guys’ jackets!” I said, still giggling.  Embroidered on the backs were “Mike” with “Keyboards” under it and “Danny” with “Drums” under it.

Sue just stared bewilderedly at them.

“Wayne’s last name isn’t Bass!” I explained. “He must be in a band with those other two guys.  Bass is the instrument he plays, not his name!”

In spite of herself, Sue started to laugh. “And to think I called all of those Basses in the phone book!” she choked.

At that moment, Wayne happened to spot us. “Hey, girls,” he cheerfully called out. “Coming in for your usual chocolate sodas?”

“Sorry, we’re dieting!”  Sue called back, as we walked off, giggling.

We avoided the Puritan for the rest of that summer. 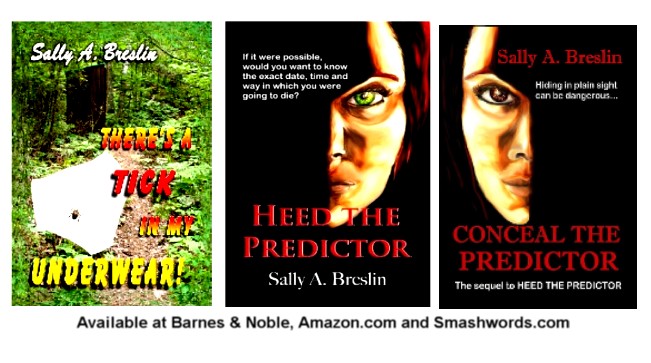