OLD HOME DAY IS ALWAYS A TIME FOR FUN


I went to the Pembroke-Allenstown Old Home Day celebration a few weeks ago and had a great time.  The weather was perfect, the food was plentiful, and I saw a lot of old friends and caught up on all of the latest gossip.  I also won one of the raffle prizes – a  spa basket filled with bath products, a fleecy robe, slippers, scented candles and more. Last year, I won a brand new guitar and accessories.

Old Home Day is kind of like a giant family reunion...without Uncle Leroy having a few too many drinks and trying to do an impromptu striptease on the picnic table, that is.

I have been to dozens of Pembroke-Allenstown Old Home Day celebrations over the years, and at each one, something amusing always happened to make me laugh.

I remember the first year there was a Miss Old Home Day pageant.  Winners were going to be crowned in several different age groups, from toddlers up to teenagers.  As I walked near the outdoor stage, where the contestants were lining up for the pageant, one of the little girls who was about to compete looked down at her dress, frowned and said to her mother, who was standing next her, "Mommy, can I get some boobs before I go onstage?"

Everyone within earshot cracked up laughing.

Another year, the person who was supposed to run the face-painting booth had to back out at the last minute, so emergency volunteers had to be recruited to work in shifts.  Let's just say that one of the face painters was by no means a budding Rembrandt.

"Oh, what a cute smiley-face red apple you have on your cheek!" I heard one woman say to a little boy.

"It's supposed to be Spider-Man!" the kid shot back, frowning.

Then there were the Old Home Days held during the big election years that attracted campaigning politicians like ants to a picnic.  One particular year, I had donated several prizes to the Old Home Day raffle, one of which was a very lifelike, life-sized baby doll.

I grabbed a bunch of raffle tickets to sell, put the doll over my shoulder in the "burping" position, and then walked around, hoping the doll's cuteness factor would drum up some business. 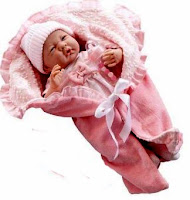 Well, I happened to come across one of the politicians, who, with his entourage, was walking up to everyone and introducing himself. This included a lot of hand shaking and back patting.  He approached me and said, smiling broadly, "Oh, what an adorable baby!  May I hold her?"

I had to bite my tongue to keep from laughing.  "Sure," I said sweetly.

He carefully took the doll from my arms and to this day, I'll never forget the expression on his face when he realized it wasn't a real baby.  Not only was he obviously embarrassed (and not the least bit amused), he shoved the doll back at me so fast, you'd think it had some contagious disease.

But thanks to him, I sure did sell a lot of raffle tickets.

I also remember when the Pembroke-Allenstown Old Home Day was one of the very first to introduce Cow-Flap Bingo.  There we all stood, gathered around a bunch of numbered, chalked-off squares on the field, cheering for a cow to poop on the square that matched the corresponding number on our ticket.  The prize was a sizable amount of cash.

Unfortunately, the farmer who so generously had donated the services of his cow had fed her what he called a “bowel stimulating” meal beforehand to make sure she would really have to "go” during the event. The poor cow ended up not being able to hold it and did her thing just before the Cow-Flap Bingo started.  This resulted in a very (and I DO mean very) long wait for old Bessie to get the urge again.

"Get the Ex-Lax!" one guy in the crowd shouted as the sun went down and we still were standing there waiting.

I don't think even the Red Sox winning the World Series got more cheers than Bessie did that day when she finally accomplished her mission.

Another year, as I walked by the dunking booth, I was asked if I wanted to try my luck at dunking a very soggy-looking firefighter, still in uniform, who was sitting on the platform.

Well, when it comes to pitching balls, my aim is so bad, I honestly couldn't hit a target the size of a school bus.  That's when I noticed that the poor firefighter wasn't even protected by the usual cage that most dunking booths have.  He was sitting right out in the open, only inches away from the target...a proverbial sitting duck.

Visions of myself conking the guy on the head with a wild pitch and then inadvertently treating the crowd to an impromptu demonstration by the Tri-Town Ambulance EMTs as they tried to revive him, raced through my head.

I can hardly wait for next year's Old Home Day.