I WAS THE ONE WHO NEEDED TRAINING, NOT MY DOG


I think it’s finally safe to say my newest addition to the family, Eden, a two-year-old boxer and Rhodesian ridgeback mix, just might work out after all.


Her antics after I adopted her forced me to put her on probation for a while. But as it turned out, I discovered she wasn’t the one who needed training…I was. I had to learn to think like a dog. And believe me, it wasn’t easy.  I have enough trouble trying to think like a human.


I adopted Eden from a shelter after I fell in love with her photo online. Her history in the description also drew me to her. It said that in the course of only a few weeks, she had been taken from her previous home to a high-kill shelter in Tennessee, was rescued and brought to a shelter up here in New Hampshire, and then was placed in a foster home.


During my first meeting with Eden, her foster mother told me Eden wasn’t housebroken, was shy and was just learning to walk on a leash. Still, I decided I wanted her.  The first thing I did after making that decision was stock up on Nature’s Miracle, the best stuff on earth, in my opinion, for cleaning up anything and everything that might come out of a dog.


When Eden first entered my house, everything seemed fine. She and Willow, my rottweiler, instantly began to play together. I kept my eyes glued on her though, mainly because I expected her to run around the house and mark her territory. But she was fine.


In fact, everything continued to be fine for the first couple of days. Eden smoothly adapted to her new environment and even better, contrary to what I’d been told, she turned out to be fully housebroken.


“This is working out perfectly!” I thought. “Eden is fitting right in, no problems whatseover. We’re a match made in heaven!”


How naïve I was.


The first negative thing I noticed about her was she was a little too possessive and clingy.  She didn’t like it when I paid attention to Willow, and she constantly clung to me – so much so, I contemplated changing her name to Saran Wrap.


About four days after I first adopted Eden, I got up one morning to find my hallway runner in shreds. This was a rug that had taken me six months to get by special order because I’d wanted it to exactly match the pattern on my living-room rug. So it broke my heart to see the entire border unraveled and lying in a heap that resembled rug spaghetti. My $19 accent rug from Wal-Mart, however, was untouched. Although I didn’t have any concrete proof which dog had done the damage, I was positive it had to be Eden. And later, when I discovered a piece of yarn stuck between her teeth, my suspicions were confirmed. 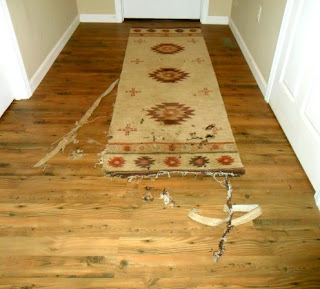 The next rug to become the victim of  “The Shredder” was the one under the dining table. She chewed off all four of its corners – which at least made it symmetrical. That’s when I really began to grow concerned about what her next victim would be. I prayed it wouldn’t be the living room rug, beige with a brown and burgundy Native-American pattern on it. Not only was it what I had based all of the décor in my living room on – it was irreplaceable. I tried not to envision it being turned into a 5’x7’ jigsaw puzzle.


Several of my friends suggested I crate Eden at bedtime or whenever I was going to be out of the house for a while. But a visit to the vet for Eden’s wellness check pretty much nixed that idea. She was fine at the vet’s…until they took her out back to weigh her. The minute she saw the cages back there, she freaked out, and there was no calming her down. The vet said the cages probably reminded her of the ones in the shelters, and she was terrified of being abandoned again. The vet also said crating her probably wouldn’t be a good idea, seeing she already had anxiety issues, because she might end up injuring herself.


A few days later, I went to a concert. When I returned home, I immediately noticed that my biggest fear had been realized – the living-room rug was rolled back, and the separate non-skid liner I’d put underneath it had been turned into confetti. I flew over to the rug to check it out. The very tip of one corner had been chewed off, but the rest of the rug still was intact, to my relief. I was grateful the concert hadn’t lasted 20 minutes longer.


But chewing rugs wasn’t Eden’s only problem. Whenever I went to pet Willow, Eden would rush over and either nip at my hand or whack it with her paw, so I would stop. I’d scold her and tell her to go lie down, but the jealousy continued. She seemed determined to prevent me from touching Willow.


The shelter contacted me a few weeks after the adoption and asked me how everything was going with Eden.


“To be honest, I don’t think this is going to work out,” I told the woman. “I’m beginning to think I’m just too old to deal with all of her issues.”


The woman asked me to elaborate, so I did – in great detail. She then suggested I work with an animal behaviorist, and even offered to send one over, free of charge. Eden, she told me, needed a “forever” home and deserved happiness. She asked me to please not give up on her yet.


I remember thinking there wouldn’t be a “forever” home left for Eden to live in if she continued to destroy it.


So I ended up talking to a behaviorist on the phone. The first thing she asked me was, “When you’re about to leave the house, describe exactly what you do.”


“Well,” I said, “I grab my purse, my car keys, and usually the packages I have to mail at the post office. I sell a lot of stuff on eBay, so I always seem to have packages to mail.” 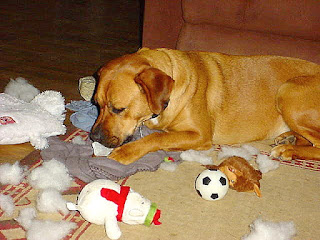 “Ahhhh,” she said. “That’s part of the problem!  Eden knows when you are leaving, and it makes her anxious. When she sees you pick up your purse and your car keys, you’re giving her a signal. From now on, just before you’re going to leave, let her out into the yard. Then while she’s out, bring all of your things out to the car. Then let her back inside, give her a treat, and while she’s busy eating the treat, sneak out. And, if you have time, come back after a few minutes, and then leave again. It will confuse her. And whatever you do, don’t say goodbye or anything else to her. Just casually leave.”


So I took her advice and tried everything she said – including a few of my own ideas, just for extra insurance. I scattered dog toys and long-lasting chew treats all over the floor to keep Eden distracted. I even went out to the woods and found four heavy flat rocks – and put one on each corner of the living-room rug, so she couldn’t roll it back again…or chew off the corners.


The strategy worked. I came home to find my house intact and the dogs asleep.


I then told the behaviorist about Eden’s jealousy and how she always tried to get my hand away from Willow whenever I petted her.


“And how do you react when Eden does that?” she asked.


“Noooo!  That’s wrong!” she said. “Eden wants to distract you, to take your attention away from Willow. She doesn’t care if you’re being nice to her or you’re scolding her. All she cares about is you’re paying attention to her instead of Willow. You have to ignore her, to let her know she can’t distract you.”


So once again, I followed her advice.  By the end of the day, Eden no longer bothered me when I petted Willow.


Now, I’m relieved to say I actually can leave the house for a few hours at a time and not have to constantly worry about coming home to a house that looks like an explosion in a yarn mill.


But just to be safe, I haven’t removed the heavy rocks from the corners of the living-room rug. You might say they’ve become my newest fashion statement.


Now all I have to do is buy some steel-toed slippers…because stubbing my toes on those darned rocks is becoming pretty painful.
#  #  #
Posted by Sally B. at 2:56:00 AM