I'M WINNING THE BATTLE BUT LOSING THE WAR

About three months ago, I declared war. Since then, it’s been an uphill battle, but I think I’m finally gaining on the enemy.


It all started when I bought a box of dog biscuits on sale.  When I got home, I opened the box, gave a biscuit to each dog, then closed the box and put it into the cabinet underneath my kitchen island. Little did I know at the time that something diabolical was lurking inside that box.


Shortly thereafter, I began to notice these tiny blackish-brown bugs, smaller than a sesame seed, appearing here and there in my kitchen. They looked hard-shelled, but they squished really easily. Just one touch and they would flatten. They also moved very slowly, which made them easy prey. So I took great pleasure in smacking them.


As the days passed, the little black bugs increased in numbers. I had no idea where they were coming from or what they were, but I was getting aggravated. They were in my dogs’ dishes. They were in my kitchen sink. They were on the stove.


I went to the computer and searched for “annoying kitchen bugs.”  Within minutes, up popped a photo of some little black bugs that looked exactly like mine. In fact, I suspected that the ones in my house had posed for the photo before they headed to my place.


The information about the photo said they were grain beetles – harmless to humans but harmful to grain products. In other words, all of the foods that gluten-intolerant people have to avoid are the ones these little buggers love. Their favorite treat, according to the article?  Dog biscuits! 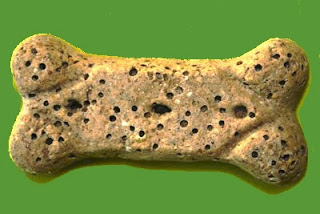 I raced to the cabinet under the kitchen island and took out the box of dog biscuits. Then I spread out a couple paper towels and poured out the biscuits onto them. Two of the biscuits, the ones at the very bottom of the box, had so many holes in them, I could see daylight through them. And popping their pointed little heads out of the holes were dozens of the tiny black bugs!


I dumped everything into a Zip-Loc plastic bag, then put that bag into another bag and took it directly out to the trash barrel. I was satisfied that my war with the bugs was over – that I had found the source of the problem and had eliminated it.


But the bugs continued to appear. And they obviously were desperately searching for a dog-biscuit substitute to sate their ravenous little appetites. I found them in the cupboards, in the dogs’ dishes, and even in the cookie jar. So I tossed out all of the food and bought a new supply.  Then I bought a bunch of plastic containers with airtight lids and put the food into those.


“Let’s see you get into these!” I cackled at the bugs as I stacked the containers in the cupboard.


I cackled even louder as I put my vacuum cleaner on turbo-suck and vacuumed every nook and cranny in the house.


For about a week afterwards, my house was blissfully free of the little black pests. I began to feel overly confident, thinking I’d won the war.


But one night a couple weeks ago, I made myself a sandwich, set it down on the island and went to pour myself a glass of juice.  When I returned and reached for the sandwich, it looked as if it had coarsely ground black pepper sprinkled all over it.


The only problem was the pepper had legs.


I checked the cabinet underneath the island and there, way in the back corner was one small piece of a dog biscuit that must have fallen out of the box before I’d tossed it out. Judging from all of the holes in it, it obviously had become a grain-beetle motel.


I threw out the biscuit, but kept four of the beetles, which I put, along with a new piece of biscuit, into a sealed plastic bag, and then set it aside. I figured I might learn something about the bugs’ habits that would help me form a strategic plan of attack to end the invasion.


Within a short time, there were over 100 bugs in that bag, and the biscuit had been turned into powder. The pests were breeding like miniature rabbits and eating like horses. I panicked.


“I have them in my house, too,” my friend Emily told me when I complained to her about my uninvited guests. “Get some kitchen-moth traps at the hardware store. They’ll really help.”


The moth trap turned out to be nothing more than sticky paper with a piece of “bait” in the middle. I got home and laid out the sticky paper on the kitchen island. I also added a small piece of cookie to the center of the paper, just in case the moth bait didn’t appeal to the beetles.


As I stood watching, two beetles immediately approached the sticky paper. They crawled onto it, and although they appeared to be struggling, one slow step at a time they made it to the bait. After a while, they left, walked back across the sticky paper and onto the island – where I smacked them into pancakes.


I figured the sticky paper must have been ancient and had lost its “oomph,” so I tested it with my fingers. It took me 20 minutes to unstick myself. My only conclusion was the dumb beetles didn’t weigh enough to stick to the paper.


“Well, just be patient,” one of my friends jokingly said. “If they keep eating your sandwiches, they’ll eventually get fat enough to stick!”


As she laughed at her own comment, I was thinking I should give the bugs her address and tell them she owned a dog-biscuit factory.


I think, however, I’m finally winning the battle. By keeping all of my foods sealed tighter than Fort Knox, and by vacuuming twice a day and making sure no crumbs of any kind are left lying around after I cook something or feed the dogs, the bug sightings have dwindled down to maybe only one or two a day. I figure the ones I’m seeing now are just starving stragglers that soon will kick the bucket.