FATE DELIVERED ME TO RICKY NELSON 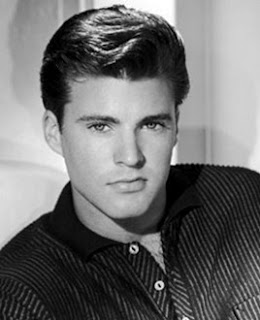 The other day, the popular teen heartthrob, Justin Bieber, was on TV. The crowd of pre-pubescent young girls who’d gathered to see him looked as if they were about to burst blood vessels, they were screaming so much.

“He looked right at me!” one girl, who couldn’t have been more than 11, screeched as the cameras zoomed in for a close-up of the tears streaming down her cheeks.

“Jeez!” my husband said, shaking his head. “These young girls sure do get carried away nowadays! I mean, all the guy has to do is breathe in their direction and they practically have a coronary. Frankly, I don’t see what they see in him.”

“That’s because you’re not an 11-year-old girl,” I said. “I can remember back when I was that age. I was crazy about Ricky Nelson. I practically needed CPR every time I saw him on TV!”

I wasn’t exaggerating. When I was young, I thought Ricky Nelson was the most gorgeous hunk of man I’d ever seen. He had dark hair, thick-lashed blue eyes, and a smile that flashed an expanse of teeth so white and even, they were worthy of the best toothpaste commercial.

Every week, I was glued to the TV, watching Ricky and his family on my favorite show, The Adventures of Ozzie and Harriet. The best part, however, came at the end of each show, when Ricky usually sang and played his guitar.

“Ooh, hasn’t he got the dreamiest eyes?’ I’d sigh to my mother every time the camera zoomed in for a close-up.

“Those aren’t dreamy!” she’d say. “His eyes are always half-mast. He looks like he’s either in desperate need of a good night’s sleep, or he’s on drugs!”

My mom sure knew how to ruin a good crush.

The walls of my bedroom were covered with pin-ups of Ricky that I’d torn out of teen magazines. I loved lying in bed and seeing him everywhere I looked, his blue eyes staring back at me from all angles. The problem was, sometimes I felt as if his eyes actually were following me around the room, so I’d undress in my closet.

One summer, when I was in the sixth grade, my parents and I spent a week visiting my aunt and uncle in Connecticut.

“Guess what?” my uncle said to me one morning. “We’re going to New York today to a new place called Freedomland USA! It’s supposed to be like Disneyland!”

I practically did cartwheels, I was so excited. If there was one thing I really enjoyed, it was amusement-park rides. I’d ridden on the roller coaster at Pine Island Park in Manchester so many times, my parents figured they owned stock in the place.

Freedomland USA turned out to be so huge, 10 Pine Island Parks could have fit into it. When we arrived, I just stood there and stared wide-eyed at all of the rides, trying to decide which one to run to first.

That’s when I noticed a big billboard to my right. I gasped and my mouth stayed open. It said Ricky Nelson was going to be in concert at the park’s Moon Bowl that day! I just knew it had to be fate. I mean, what were the odds I’d be at a place I’d never even heard of before, on the exact day my idol was going to be appearing?

“Did you know Ricky Nelson was going to be here today?” I asked my uncle, thinking just maybe he’d known about it and had wanted to surprise me.

That pretty much answered my question.

Ricky’s appearance still was two hours away, according to the billboard. But I wanted to head over there immediately and get a good seat...preferably on his lap.

“Oh, you’ve got plenty of time,” my mother said. “Go on some of the rides. That’s why we’re here. We’ll eventually work our way over to the concert.”

I frowned. I didn’t like her use of the word “eventually.” I knew there was no way I was going to be able to enjoy any of the rides – not when the object of my desire, the subject of hundreds of my dreams, was practically within shouting distance.

I rode on an underground train that went through a cave loaded with bats, lava and monsters. I boarded a ship that was attacked by pirates. I took an aerial ride to the top of the fake Rockies.

The problem was, I barely remembered any of it. My mind was too preoccupied with thoughts of Ricky.

When we, at long last, finally reached the Moon Bowl, I couldn’t believe my eyes. It was an outdoor stage that looked as if it was in a deep hole surrounded by a zillion rows of seats. From where we stood on the pavement, we could look down at every seat – all of which were occupied. In fact, people were standing six rows deep all around the perimeter.

When Ricky Nelson was introduced, I actually felt my heart start to race. My mouth felt so dry, I thought my saliva had evaporated. Then, the moment I’d been waiting for finally arrived. Ricky walked out onto the stage. The applause, cheers and screams were so loud, I was pretty sure the people back in New Hampshire could hear them.

I craned my neck to see my dream man. I was so far away, he looked only about a half-inch tall. All I could see was a white dot on top of a black dot, which I assumed were his white shirt and black pants. And when he started singing, I couldn’t even tell which song it was.

That’s because I was screaming so hard, I nearly burst a blood vessel.